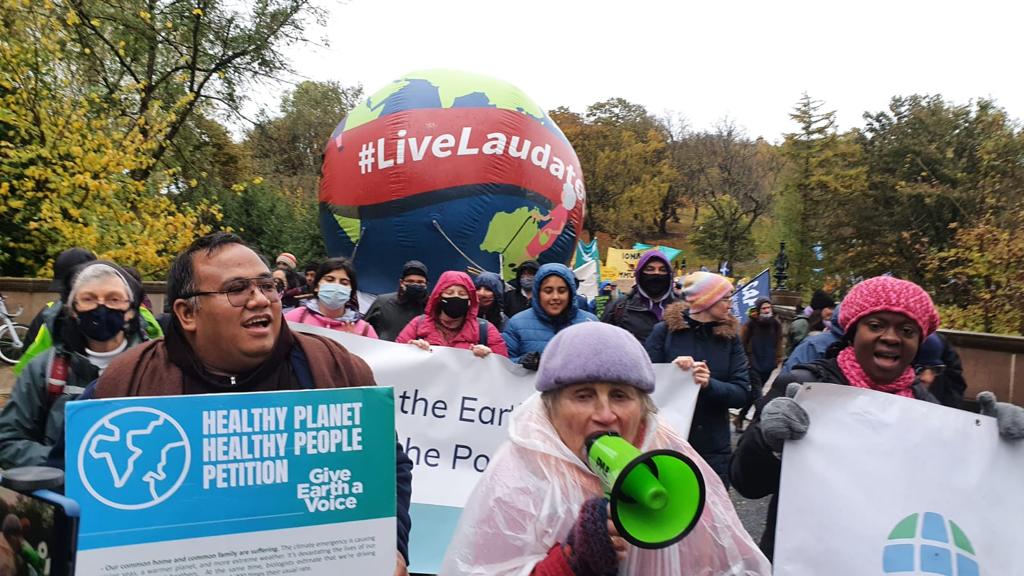 More than a decade before Pope Francis wrote the encyclical Laudato Si’, Isabella Harding was teaching her high school students about the importance of caring for God’s creation as a religious education teacher in Bristol, England.

Now the 67-year-old Laudato Si’ Animator and grandmother of three is advocating for our common home by marching alongside climate activists and praying at the United Nations 26th Climate Change Conference in Glasgow.

“I do everything I can,” she said.

She’s been supporting climate justice for decades, even if by another name.

She remembers the late Prime Minister of the United Kingdom Margaret Thatcher warning the world about climate change in 1987.

“The most pressing task which faces us at the international level is to negotiate a framework convention on climate change—a sort of good conduct guide for all nations,” Thatcher told the United Nations General Assembly 34 years ago.

Harding was worried about the climate crisis then as well. “But I was confident they would do something, and they didn’t,” she said.

That hasn’t stopped her own activism, though. The mother of five came to Glasgow because “this is a crucial moment of the world and for everything and to be a witness,” she said. “I’m praying because this COP will be a success like Paris, if there is real action taken now.”

She prays the Laudato Si’ Chaplet every day, and has spent hours praying outside of COP26 in the interfaith vigil, which has been held for six hours daily.

“Prayer is the answer,” she said.

LSM at #GlobalDayOfAction Glasgow's #COP26🌐"We inflated the globe in torrential rain. Soaked already, it caught on something and ripped! Using all our grit and creativity we repaired it.If only the politicians and everyone had the same urgency to repair our broken world." pic.twitter.com/8LXJncwKQz

Her activism, however, is one of prayer and action.

In July 2020, she completed the free Laudato Si’ Animators training program, which connects thousands of like-minded Catholics and helps them better understand Laudato Si’ and the root causes of the climate crisis.

To finish the free six-week program, she and other Animators led a community project that took action for God’s creation.

“[The program was] very, very good because it combined the faith and prayer with living in the world, our current reality, which is how we live our faith,” she said. “Our faith is not something aside from how we live.”

On Saturday, she marched in the rain and wind for five-plus hours with the Laudato Si’ Movement and other Laudato Si’ Animators. The group trudged along in solidarity with more than 100,000 people during the Global Day of Action for Climate Justice.

🌐 Our #GlobalDayOfAction in Glasgow for the #COP26 while soaked in torrential rain and winds alongside the #Faiths4Climate #Faiths4COP26 movements, was really powerful and meaningful. 👉 Follow us for more: https://t.co/S3g3N8tKTV as we enter into the 2nd week of COP26! pic.twitter.com/XiEznZLHXo

The chants have changed over her life of activism, but her passion for God’s creation has remained. She continues at home by teaching her grandchildren – ages 1, 6, and 8 – about the climate crisis and caring for God’s creation.

“I also have support from my children and grandchildren in doing what I can because I can do more than they can do because they’re busy working and so on,” she said. “But my commitment to the climate predates them.”

Join the conversation: Share your thoughts below in the comments section.

Read and watch more about COP26: