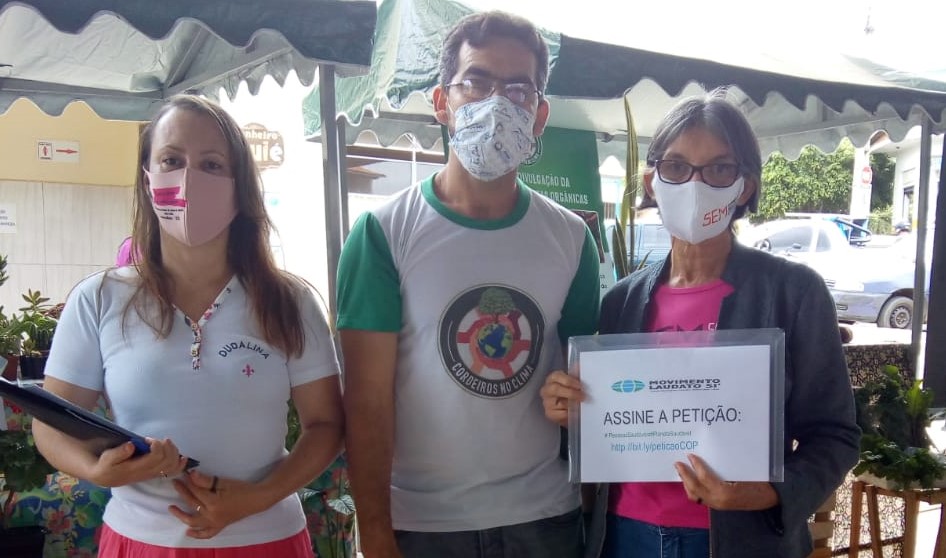 I am Mildaiza Soares Figueredo. I am 59 years old, I am a retired teacher, and I participate in the Pastoral Commission for the Earth (Comissão Pastoral da Terra – CPT) of the South/Southwest region of Bahia as a volunteer. I participate in the Santa Rita de Cássia Community (Rural Area) in the Senhor da Boa Vida de Cordeiros Parish, Diocese of Caetité, state of Bahia.

I met Laudato Si’ Movement in 2020 through a friend, Father Waldech Brito Gondin, who invited me to take the Laudato Si’ Animators course, and with another friend, we took the course and final project together. I fell in love with Laudato Si’ Movement because I am passionate about the environment and also a defender of it. I knew the document Laudato Si’ in a superficial way because it is still very little known.

In 2021, I signed up for both stages of the LSA course, as there is a lot of knowledge and interesting information, and I also signed up for the group Guardiões da Casa Comum (Guardians of the Common Home), as I wanted to do something more for our common home.

As soon as I heard about the Healthy Planet, Healthy People petition, I was super excited and made the intention with myself to get as many signatures as possible.

The headquarters of our municipality, Cordeiros, competed for a public notice from the federal government, with a project entitled “Cordeiros no Clima” (Lambs in the Climate), for which the objectives were afforestation of streets, squares, and public places; raising awareness of the population in relation to the conscious consumption of water, electricity, and garbage collection; and the construction of vegetable gardens in schools and also in the Associação Clube de Mães da Paróquia Senhor da Vida de Cordeiros/BA (Mothers Club Association of the Senhor da Vida Parish in Cordeiros, Bahia).

As part of the project, fairs were held to display the organic products grown in the gardens.

On 23-25 September, it was the turn of Mothers Club to hold an exhibition fair for its products. So I took advantage of the moment, talked about Laudato Si’ Movement and about the petition, and I collected signatures – gathering more than 30 in those days.

In addition to the fair, my final project for the Laudato Si’ Animator program was to meet with the associates of the Mothers Club, to talk about Laudato Si’ Movement and invite them to sign the petition. This happened on September 27. I made an agenda/script, and I showed a video with the song “Tudo está interligado” (everything is interconnected).

I also talked a little about the environmental problems we’re facing, and we watched a video of Pope Francis. Then we collected signatures for the Healthy Planet, Healthy People petition, getting 10 more signatures that day.

I participated in another event, on October 1, the Meeting of the Rural Associations Central, which takes place monthly. I explained a little about Laudato Si’ Movement and the petition and got another 15 signatures.

In the Santa Rita de Cássia Community, we agreed to have a moment of prayer for God’s creation and on October 2, we prayed an ecological Rosary, starting with a family, going on a small walk, meditating each mystery and making our way to the church, ending with the Prayer of Season of Creation, and collecting more signatures to the petition.

And finally, on October 3, I participated in another event called Predeitura Itinerante (Itinerant City Hall) held in a rural community in the municipality, where there were activities from all municipal secretariats. I participated in the stand of the Agriculture Secretariat, where I also spoke about the movement and the petition and got 37 more signatures.

As a way to show gratitude and to connect people with the intention of the petition, I prepared something special. Everyone who signed the petition received a bag of popcorn containing seeds of Moringa, Flamboyant (popularly known here as Canjoão), and Sibipiruna.

I encountered some difficulties along the way. Some of these were lack of knowledge about the Laudato Si’ encyclical and Laudato Si’ Movement. Others were people who did not have emails to be able to sign the petition, and people who had technological difficulty.

I collected all the signatures on paper due to all these difficulties in the rural area where I live, and I managed to make the signatures in the system online myself despite my own limitations. For those who did not have emails, I sent their information to the Portuguese-speaking team at Laudato Si’ Movement so that they could be accounted for in the petition tally.

What has motivated me? As I said before, I am a lover of the environment and a defender of it, and doing something to change a little bit of this chaotic reality is what motivates me every day. I can do my part, however simple it may be.

I end with this phrase from Pope Francis: “…men and women are still capable of intervening positively. For all our limitations, gestures of generosity, solidarity, and care cannot but well up within us, since we were made for love” (LS 58).  PRAISE BE FOR ALL OF CREATION!

JOIN US IN ACTING TO CARE FOR OUR COMMON HOME: Our Laudato Si Animator training is a free leadership development course that will empower you to bring Laudato Si’ to life!

Laudato Si’ Animators like Mildaiza embrace the challenge of making a difference in their communities.